Let's start by saying that our priority is to create a good and rewarding card game.  Card games are our passion for years and we love everything about it. Collecting, trading and playing. These days you can only collect and play. You can’t have your own collection of specific cards of specific games and trade them in digital world. This will change. We believe that NFT is simply a technological add-on that will help bring the analog feeling of collecting and exchanging cards into the digital world. Currently purchased cards are the property of the issuing companies and cannot be used outside of a particular game. Cards in NEOSPACE will be fully owned by the player, who will be able to dispose them at his will. However, this does not change our main goal, which is to create a thoughtful and rewarding card game complemented by innovative technology. The basis of the game must always be good gameplay.

The most important thing is to understand the basics. What makes a card game exciting? What is a card game? How can we approach it to keep the gameplay fresh, but not too far from its roots?

The game must be divided into two important phases. First, the creation of the deck, and second, the gameplay itself. Not every player who can create perfect decks can use them in gameplay. Likewise, not every player who can demonstrate perfect execution will create great and polished decks. Completely different skills matter in each of these phases, although the basis of those skills will always be the ability to make decisions based on the data we have.

For this reason in the development of the game we focus primarily on a clear interface, which will contain the most important information necessary for smooth deck building and gameplay. We see no point in hiding access to certain data, because external software and overlays will provide this information anyway.

NeoSpace does not have mana mechanics, but summoning more characters, mechs and aliens involves sacrificing units that are already on the battlefield. Units with properly balanced amounts of attack and defense will allow for dynamic and strategic gameplay. The units themselves have only one position, but they will be able to block enemy attacks, which will be determined by the difference in attack and defense of a given unit.

We believe that over time the introduction of a standard in which the available cards are rotated is inevitable. This way we not only fight stagnation, provide interesting gameplay, but also create a kind of sentiment. Although at first it may seem unfair that my favorite card falls out of the rotation, at the very end, we avoid fatigue, and when it returns to the standard after a few months we appreciate it even more. Card rotation will most likely be introduced within 3 years. People who will have cards that will not be included in the standard will be compensated accordingly. Of course, you will be able to continue to use them, but in free mode, which will not be the main focus and balance.

The issue of Power Creep in our game will be addressed naturally through storytelling and add-on structure. The NeoSpace story outline at the very end is not only a simple story, but also a well thought out concept. Earthlings are trying to fend off a space invasion that occurs in 2047. At the beginning our technology is just prototypes, so cards - basic at first, with time like prototypes will develop. Over the years the technology of fighting aliens is improved which will be reflected in our cards. We believe that the disproportion of introducing new cards will almost always be present, but done consciously and on the basis of a well-thought concept, it can bring a lot of fun and satisfaction.
Integration with Blockchain.

For us, cards are a passion. Not only in terms of gameplay, but also as a collector.

Buying, exchanging cards, opening packs and adding interesting uniques is simply a hobby for many of us. During our conversations with players, we have repeatedly heard the issue of collecting cards in available digital card games. When we find a unique card we can't show it off to anyone who is not currently playing our game. With NFT, we can recreate that feeling where once we get a new rare card, we can show it off to anyone. And then according to our needs, add it to our collection or sell it on any other NFT exchange in the world. It is a solution that not only allows true freedom in the digital world, but also an eco-friendly solution that saves on production, paper and logistics costs.

When, in 2027, the Polish archaeologist Michał Witkowski discovered the old book of Nostradamus in the vaults of Krakow's crypts, no one expected that in the next 20 years the Earth would face the greatest challenge in its history.
At first, when examined with great distrust, she revealed a cruel prophecy over time. A brutal primal danger looms from the Orion Belt just above the star δ Ori towards our planet. But who believes in stupid prophecies? A small group, guided perhaps by intuition, or perhaps by destiny, began their research. The truth
reveals itself with increasing cruelty. Darkness envelops the universe and is coming our way. We have to prepare, but no one wants to listen. Numerous auditionss with presidents, prime ministers and ministers over the years - no one was listening. At the same time, artifacts left on Earth by an alien civilization, thousands of years ago, were found. The change came in 2039. 8 years before the alleged invasion. The first Polish trillionaire, Tom
Sosnowsky, starts working on a technology that will defend our world. Thus, in 2046, the first prototypes of the X1 Zeno and X2 Alfa mechs are created, whose mission is to fight off the first wave of invasions and gain more time to refine the technology.
The invasion began in early July 2047. Everyone believed it now. The cosmic tactic turned out to be cunning, it influenced our minds, and regular fights resulted in heavy losses. As time passed, Sosnowsky's true motivations began to emerge. A new technology called NeoSpace was being developed before our eyes. A new reality that depends only on us.

All cards will be divided into two factions. The earthlings who are repelling the invasion and the aliens who are attacking. Each faction in each expansion will feature unique concepts and mechanics. At first, emergency mechs, supported by medical bots and extra parts will have to face dark aliens who manipulate mental matter and can influence human behavior. In time we will show rare cards, illustrations and of course the rarest cards - i.e. space and ancient. The ranking system will depend on the result of two factions - we don't want players to grind one deck. 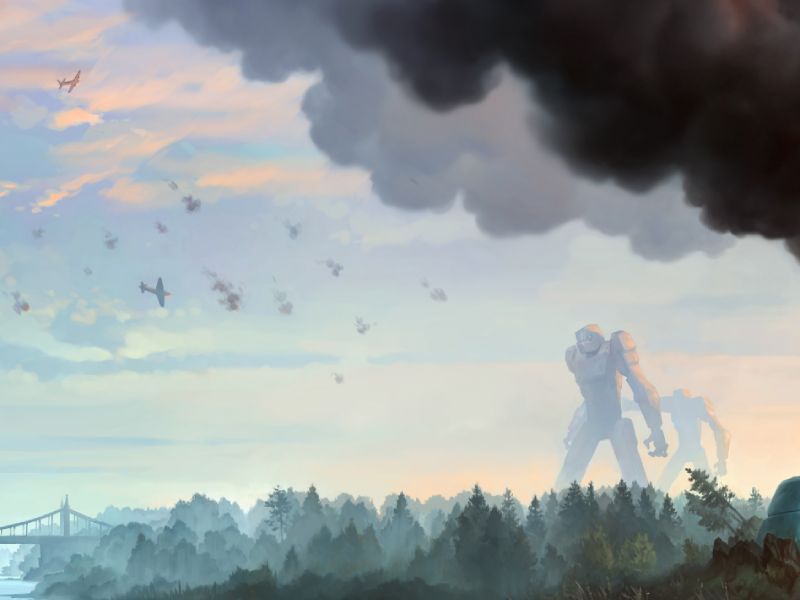